Towards A Spiritual Economy 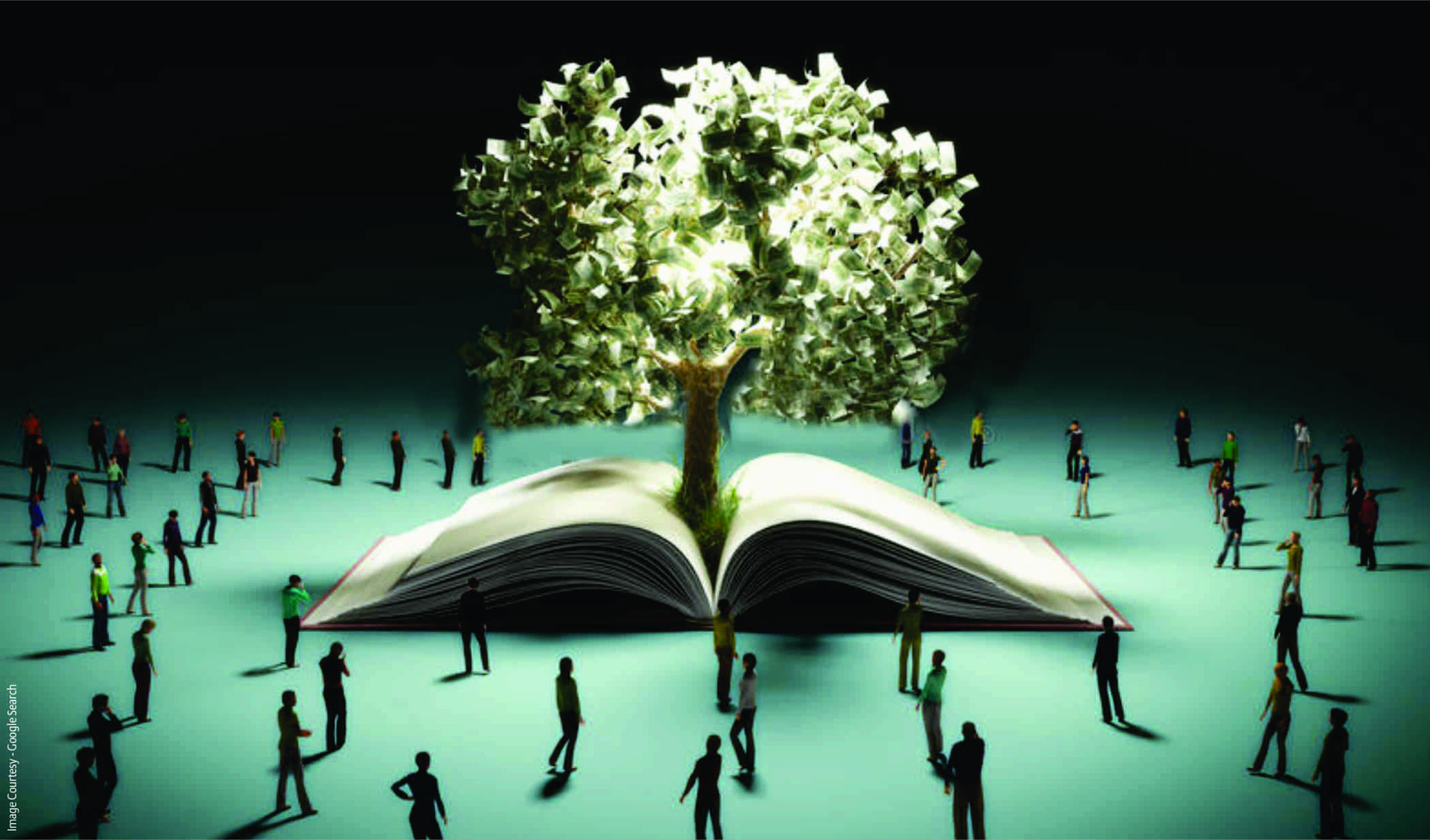 India is considered as one of the fastest growing and seventh-largest economy in the world with a GDP of $2.72 trillion. Our economy has evolved over the years considering the progressive increase in domestic consumption along with being the sixth largest consumer market in the world. These statistics gives us an insight into the increasing demand and subsequent supply need of our country owing to being exposed to globalization. India has seen a change in preferences, taste, fashion, products emerging out of exposure to technological advancement. Wherein the olden days we were limited to newspapers or word of mouth as a form of advertisement, the exponentially increasing digital revolution has given rise to exposure to a plethora of offerings and services on a global scale. International trade due to liberalization opened new avenues of business treating Indians with choices leading to the cause and effect phenomenon.

If we go back in time before British Imperialism, India was considered one of the richest countries with a global GDP of approximately 23% boasting of rich resources, wealth, agriculture, textiles etc. India was a self-sufficient country with a flourishing economy and a global reputation of being a golden bird. India’s culture is universally celebrated as the world’s oldest civilizations. In fact, the Indian subcontinent is birthplace of religions like Hinduism, Buddhism, Jainism, Sikhism at the same time it’s given birth to a culture of yoga and meditation. Through Yoga, India is internationally promoting a culture of how to live simply and healthily healing one’s body, mind and soul. Pre-independence, Indians were self-reliant, content and self-contained with one such example of Gautam Buddha who renounced his princely title and chose the path of Spiritualism. He spread his ideology that desire is root of all evil which is in coherence with Gandhiji’s self-sufficiency philosophy. Just have enough to sustain and build a sustainable world around you.

The Gandhian philosophy or Gandhian economics is based on promoting human dignity by placing a greater focus on growth of the community rather than on self-interest. He believed that progress of an economy depends upon attaining self-sufficiency by the balanced development of all regions of our country. Our country has a large disparity in the socio-economic status-quo which Gandhiji wished to eradicate by focusing on development of masses but more significantly focusing on the growth of the underprivileged. He wished to imbibe an ethos promoting equality, self-sufficiency, personal and spiritual development along with working towards a social benefit. He advocated the Khadi movement and promoted home-grown products procured from local resources thus providing employment opportunities and endorsing the idea of ‘Sarvodaya’ – meaning welfare for all.

The essence of Gandhian economics emotes the importance of human value rather than monetary advantage generated for self-benefit. One must develop an ecosystem where wants must be minimized and one must live a simple life driven by self-sufficiency rendering materialistic desires. This philosophy was prominent in the olden days where display of one’s wealth was considered crass and vulgar but minimalism or simplicity was considered a sign of affluence. Such a culture has surely been lost in translation over the years. Self-sufficiency has now become self-sustainability which means surviving rather than living. Lesser focus is placed on thoughtfulness but more about unhealthy competition, immoral and unethical social and professional choices just to standout in this process called life. What does one achieve from being at the forefront? Success, appreciation, monetary compensation - yes but at the cost of compromising on special moments with your family, being a good parent, partner, or a responsible human being and most importantly the feeling of happiness.

We are competing within human societies in outdoing our prowess in material gains without focusing on whether this consumption is even required. We can better understand this with Abraham Maslow’s hierarchy of needs which is a theory based on universal human behavior of motivation. He asserts that the goal of human beings is to incrementally meet the hierarchy needs of an individual. If you’re hungry for example, you eat food meeting your basic need but its value to the individual is diminished once the need is satisfied and a higher level of need will motivate the individual. If each individual functions similarly and keeps starving for material gains, it can lead to the butterfly effect, which is how smaller actions lead to larger consequences. More and more people are influenced by following what others are doing, increasing inconsequential consumption multiplying that much amount of waste, generating greenhouse gases and increasing our global carbon footprint. Clearly with every progressive year, the impact of such negligence is affecting not just human societies but every ecosystem without a sense of individual responsibility. We are so consumed in competing and achieving a greater stature that we find ourselves missing out to live, breathe and appreciate the life that we are living.

In the words of Gautam Buddha – “Happiness does not depend on what you have or who you are. It solely relies on what you think.” It’s sometimes dreadful in trying to think back on the last time we truly thought we were happy. We are unaware of the worries of people closer to us because we consider our tribulations above everyone else’s and forget that we can spread happiness to someone who might need it more than ourselves by simply just being present in their life. There are many recent stories on the younger generation losing hope on their life, I often wonder what would happen if they just spoke to one person and confided in – it would make a world of a difference. Unfortunately, our threshold of self-worth is limited to the number of likes or comments rather than valuing oneself but just trying to survive in a world of external appreciation. Humans are inherently social in nature and thrive on receiving validation from others which grows over time. Therefore, self-sufficiency which is a sense of self-worth is necessary to be imbibed from an adolescent age to help them deal with negative events stoically and gracefully. Once you have developed this approach with a balanced mind-set, we start living a happier life by appreciating all that we have rather than living up to someone else’s perception of our happiness.

To understand on how to address this, we need to talk about Spiritual Economics. It’s important to adapt a Spiritual Economics approach by focusing more on the development of the economy of the society rather than a Me, Myself and I outlook. Economics can be understood as the science of money created by humans to put an empirical value on one’s material prosperity. We need to develop a value-based economic structure which is devoid of materialism but embraces human dignity above all. Materialistic pursuits can only provide temporary fulfillment but it cannot buy mental peace or happiness. Economics with an objective of self-gain leads to one being more self-invested leading to more stressful lives. Adding spirituality in the economics of things would mean looking out for the benefit of others devoid of a self-interest in return. A self-sufficient individual can replace ego with empathy by empowering others as well for their well-being. A selfish person will find ways of working towards only self-growth at the cost of his own true contentment but a self-sufficient person will find a midway by being minimalistic, authentic and contribute towards the development of the community hence building a stronger economy for our current and future generations to come. Maybe it’s time to go back to our roots, may be its time to live a simpler life. Let us go back for a brighter sustainable future.

2 responses to “Towards A Spiritual Economy”

CHANDRA KANTH AttachmentsFri, Oct 25, 3:40 PM (19 hours ago) to bagichelp, rakesh.gaikwad02, bimalokpal.hyderabad, customerservice, wecare, ggro, head.customerservice, bcc: anuradha.swami, bcc: cyber.cell, bcc: websaleslife With the reference to the above said ticket no me want to place few words if Bajaj is not in a stage to issue policy by today me want cancel the policy and want refunds as early as possible. Bajaj is not in a stage to issue policy even after 11 day of payment all the staff including Bajaj head office staff like rakesh.gaikwad02@bajajallianz.co.in simply time passing and playing an game of issuing ticket no want wait for 24 to 48. rakesh.gaikwad02@bajajallianz.co This gentle men took an copy of my vehicle RC and my vehicle engine no chaser no and promise to issue policy in 10min on 22/10/2019 and made an call on 23.10.2019 and simply saying mail not yet received tell. Tell that fellow to chek mail on 22.10.2019 @ 05:32 hrs. Every time simply saying Some technical issue and allotting a ticket no. Me what to do with ticket no shall i fold it and keep it in my back pocket. My payment was on 14.10.2010 Me much worried because Bajaj is literally tourchering me issue policy even after payment after 11 days. In case of clams me cant imagine.

Dear Sir, Its really wonderful article saying about self development of ECO System to focus on simple living and development of society (Survodya approach)

dear sir, please stop all your activity and sponsershp and first upon audit your customer support. you are cheating with customer and make these type of your company so stop making people fool.