Luxuries may have gone up but so has sadness – New World, Old Rules 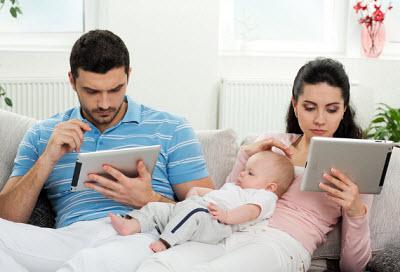 One lazy Sunday afternoon, my father and I were sitting over tea in the balcony and we were discussing about general things. In the discussions, he mentioned that change is altering our world faster than our expectations. To which my reaction was, isn’t that exciting, why should you be worried? He looked at me , smiled  and continued he said for him as a child, when he grew up, life was much simpler, “few hours of school, lots of outdoor, going asleep by 9 in the evening and getting up early in the morning", I interrupted but that is because there were no televisions and long-distance communications literally meant yelling, choosing to ignore my interruptions  he further added “and when you were born, as you grew up, we had a television, telephones and a motor car but the effects were still calm.” He explained to me that over the last few years, the pace of change has accelerated to the point where it is shaking up the very basics of society.

The rate of change is growing exponentially.

Made me think, is this change going to affect the very essence of living, will a completely new world with new rules evolve?

Years ago, when I started working, the workplace efficiency was calculated on basis of the amount of task I had on my desk in the morning and the work that I completed during that entire day. Once I left office till I reached back the next morning, it was a complete disconnect from work. Those days I spent my evenings being with family, meeting friends, playing sports and spending time with my little kids. Towards the mid-90s, the basic mobile phones were announced. In that era, electronic components were too expensive and mass production sounded like magic.

By the turn of the millennium internet developed, soon after which social media opened wider reach and opportunities. World shrunk to a smaller place, speed of communication, travel, artificial intelligence, you name it you have it. In just about 10 years’ time, entire world has changed and the future looks unstoppable but at the same time the side-effects in terms of depressions, nervous breakdowns, suicides and social unrest also seems to have moved up considerably.

Luxury has sure gone up but at the same time the sadness level has also grown exponentially.

Twenty years ago, such issues would hardly exist, however in terms of definition of materialistic comfort technology has brought us a long way but then it throws up the fundamental question -  Are we not able to cope up with the change?

The future offers more choices than ever before, with having robots and virtual realities we will eventually create a technology based ecosystem around us which wouldn’t require us to step out of the house at all, the concept of work from home would change into work from anywhere. In the era of surveillance, the concept of privacy would just disappear. With super human powers, we might start living on Mars but we will also become completely isolated in the entire process.

Change will not stop and the rate will increase further, if as a father I had to give advice to my children to live happily in this world what will it be

Never give up communicating - be it at home, with friends or in the professional world.

Lead a life which is fully transparent, they should be honest with themselves and others.

Have strong decision making capabilities, with internet, knowledge is no more power, what matters most is the ability to make decisions.

Last but not the least, the ability to be comfortable with one’s own-self is going to make a huge difference going forward.

You may have the best of luxury in the life but it will not take you anywhere.

I realized how much ever the world changes, humans might become superhuman, but a day would still be instituted in 24 hours and the basics of living and being happy would always remain the same.

My Dad looked at me with a smile and said – you have been silent for a long time my son, it’s time for me to go for my evening walk.

I looked at my dad with calmness and said, I just realized that the world may move exponentially to a different level all together, but the essentials of being happy and leading a good quality life will never change.

He smiled as he got up and said “Son you have grown up, you speak the right stuff – New World, Old rules “.

14 responses to “Luxuries may have gone up but so has sadness – New World, Old Rules”