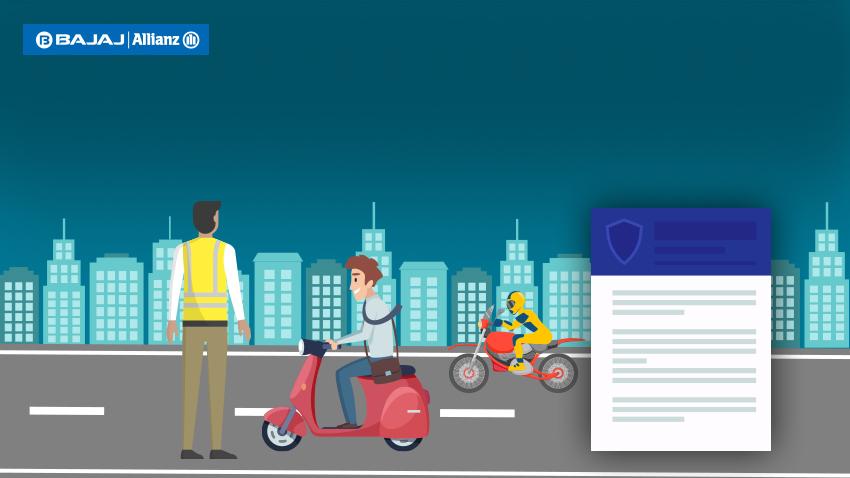 In India, valid vehicle insurance is a part of the mandatory documents that should belong to the rider of a motorbike. The government policies clearly state that driving without vehicle insurance is illegal as per the Motor Vehicle Act, 2019. Even then, nearly 57% of vehicles on the road in India are uninsured. As per surveys carried out in 2017-18, this number touched 21.11 crores. Among the uninsured vehicles, 60% of vehicles are two-wheelers, which is also the most popular form of vehicles in India. Bike Insurance is a contentious issue in India, given a high number of uninsured vehicles constitute bikes. There are rules that dictate heavy bike insurance fine for riders who are caught in violation of the same. In this article, we explain more on the importance, and consequences of missing out on insurance for your two-wheeler.

The act clearly deems it illegal for a person to drive a two-wheeler without valid vehicle insurance. If the person is caught doing so, there are provisions for capital punishment and fines. This has been done to curb the motor-vehicle-related deaths that are only growing in number. In 2019, there were more than 1,49,000 deaths reported in India, that occurred due to road accidents. It’s pretty evident that road safety is a worrisome issue for civilians and stringent policies are required as a response. Therefore, alongside penalties for violating the laws, the Government has also imposed a Third-Party Liability Insurance mandate. According to this mandate, the drivers will be insured for the losses they incur to a third party in the case of an accident.

There is a series of penalties that can be levied on you in case of not adhering to bike insurance policies. There is a fine of 2000 INR which has been ramped up from the previous fine of 1000 INR recently. There is also a provision of 3 months of imprisonment in applicable cases. No Claim Bonus or NCB in bike insurance is a benefit that you get if you haven’t had the chance to claim your policy while it was active. If you’re caught without valid bike insurance for 90 days or more, the NCB is elapsed. In an odd scenario where you get involved in an accident while driving an uninsured vehicle, you’ll not only be charged with a criminal offense (negligence) but will also be liable for paying the losses incurred to the third party. It’s a double blow.

What happens if you get caught without bike insurance?

In an unwelcoming scenario of you getting caught by a traffic police officer for violating traffic rules pertaining to vehicle insurance, the following ensues. You’ll be asked to present all the legal documents related to your vehicle. This involves everything from your Registration Certificate (RC), Pollution Certificate, and obviously, the Insurance Policy. You’re to show all the documents to the investigating officer. In case you don’t have the documents handy, you’ll be eligible for a bike insurance fine. The fine will be issued to you depending upon the lack of documents. Different documents invite different number of fines. The fine will be issued to you in the form of a challan paper which can be used to pay the fine. There are online payment options available as well. In most cases, the challan can be paid via the state department’s e-challan website. For offline payment, the same can be done by visiting the nearest traffic department office. Tips On Avoidance Of Two Wheeler Insurance Fine

The traffic scenario in India and personal road safety guidelines warrant that valid bike insurance policies should be carried by all bike owners. It’s a one-part moral responsibility and one-part legal obligation designed for safer roads across India. Stay compliant with the latest policies, to avoid negative consequences. Make sure to get relevant two-wheeler insurance as well.