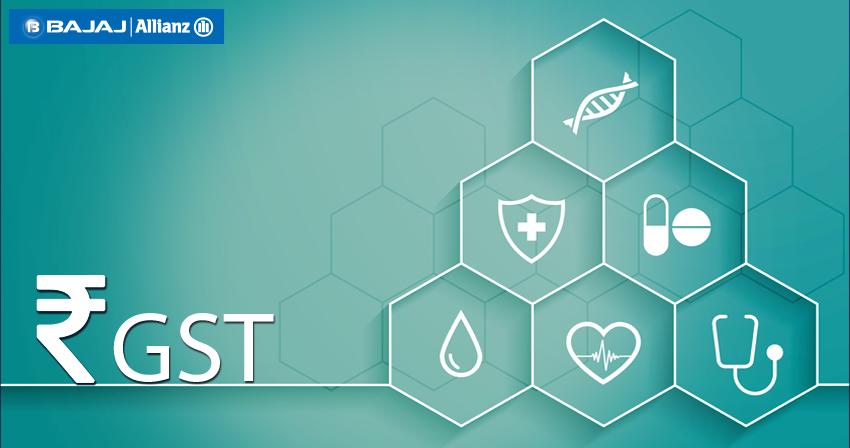 The goods and services tax GST has removed the cascading effects of multiple tax systems on products and services. The insurance sector too is impacted by GST. There has been a 3% hike in the sector, proliferating the impact on personal finances, although marginally. Let's take a look at the impact of GST on health insurance, how GST rates can influence premiums and renewal of medical insurance with GST.

The entire health insurance premium amount comes under the purview of GST. However, in the case of life insurance, GST is only applicable to the risk coverage component of the premium. For life insurance policies the investment component leading to maturity benefits does not come under the purview of GST. For example, health insurance policy coverage of INR 5 lacs with a premium of INR 10,000 will have the following impact: Before GST, the tax applicable was 15% on premium. As such, the total premium on INR 5 lakh shall be 15% of 10,000 which is equal to INR 1,500, leading to a total amount of INR 11,500. After the implementation of GST, the currently applicable tax is 18%. Therefore, premium is calculated as 18% on INR 10,000 leads to a total amount of INR 11,800. Technically premiums are greater with GST compared to the previous tax system. However, an exception lies to those who purchased long term policies before GST. They will not be impacted by the GST effect. Although, at the time of renewal, the premium charged will include a GST of 18%.

The positive impact of GST on medical insurance has led to insurance policies with several affordable premiums. This has been a boon as healthcare costs are steadily rising to create a compatible financial burden on people with health insurance policies. Today, affordable premiums are so relevant in the market that people purchase health insurance more than they did before. However, considering the negative impact of GST on health insurance, additional charges on applicable tax rates have led to the unavailability of an input tax credit. The scenario is the same for policyholders having group policies. The input tax credit is neither available to individuals, or group policyholders.

Impact Of GST On Tax Deductions

Policyholders claim tax benefit with deductions under section 80D and section 80C of the income tax act. As per section 80C and 80D of the income tax act, specified taxpayers can claim a deduction for the entire premium paid to the company for specific insurance schemes. GST on medical insurance is levied as an indirect tax with the actual value of service. The entire amount so charged under GST laws can be claimed as a deduction as per current norms. For example, the sum insured of a policy is INR 10 lacs. Policyholders at the age of 30 would pay a basic premium of INR 7,000 with a GST of 18% on 7,000 equals INR 1260. The overall premium adds up to INR 8260. Similarly, a person of 50 years old purchases the same policy with the basic premium of INR 17,000 and the GST of 18% on INR 17,000 adds up to become INR 20,060. The additional amount of GST applicable on basic premiums in both cases can be claimed for getting a tax-saving deduction benefit under section 80D. Therefore, the total premium amount of INR 8,260 & 20,060 can be claimed as a deduction under section 80D. However, the presence of an investment limit determines the tax-saving deduction amount under a particular section.

No matter the mode of payment, both advance premiums and on-date premiums both the GST charge. The implementation of GST led to the development of various policies making health insurance policy an affordable one for every sector of people. For concerns on GST refund, individuals paying GST on health insurance premiums cannot claim a refund on the GST. The GST component can be viewed on the health insurance premium sheet offered by the provider. The risks and benefits of the changed tax structure do come with additional provisions. For policyholders, it is important to check the premiums along with the tenure, claim settlement ratio, and process to ensure a good policy for the long run.