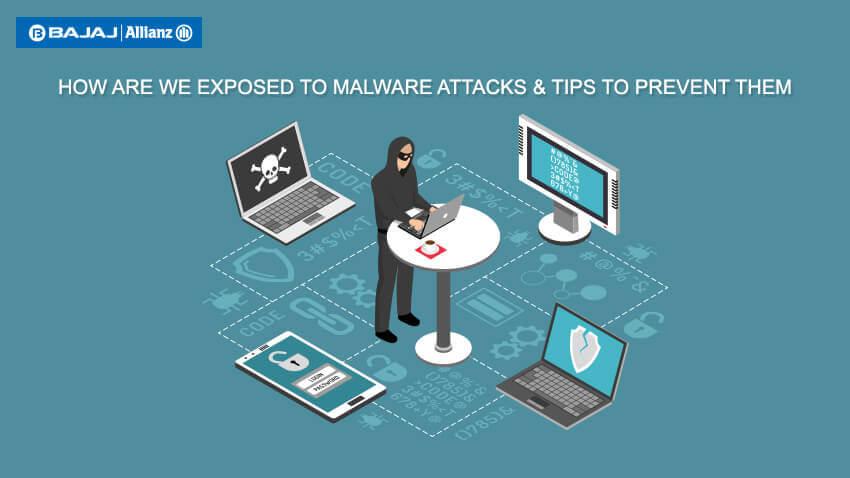 Types of Malware & Tips to Prevent Them

The K7 Computing’s Cyber Threat Monitor Report finds there is an increase in the malware and ransomware cyber attacks in India. Mostly, the Indian Enterprises who are either unaware or not have requisite safeguards to protect their networks are at a higher risk. Did you know that conducting malware attacks has now become a business? Yes, some businesses are working as Ransomware as a Service (Raas). Ransomware is one of the types of malware and is one of the most common attacks propagated by hackers to extort money from users. All of this happens on the dark web. These businesses are also advertising their services on the dark web, strange but true. In this except, we will know more about malware attacks, its types, penetration methodologies, preventive measures, and cyber security insurance for these cybercrimes.

Expanded as Malicious Software, malware is a set of codes and algorithms that are developed by hackers. It is typically used to cause system damage or get unauthorized access. Any malicious software cannot self-inflict itself onto a system. For any malicious software to work and do the damage, it was intended for; the user has to engage. Yes, some anti-viruses provide immunity to the systems and networks. The antivirus can either indicate the risk associated with the email sent on your ID or restrict the hacker from getting access even if you have engaged with the malware. But, the malware developers keep on mutating the virus to bypass the anti-viruses’ barriers. Hence, it is essential to update your antivirus software for efficient protection.

Common Types of malware in India

Mostly we have a fast and loose attitude when it comes to learning about the native jargon of security from cyber attack. But, knowing the terminology plays a fundamental role in containing and sanitising the threat. Ransomware attacks make you hostage of the attacker and until, and unless you pay the hacker, the system won’t be released. Today the hackers are leveraging social engineering to customise the ransomware attacks for inflicting the most significant damage and extort money. Moreover, such ads run on legitimate and popular websites, so the user can do nothing but trust and engage. They can gain access to the keystrokes used by the user and steal the passwords easily. This makes spyware another form of malware cyber attack that you should be aware of. Some malicious software will get access to the system and start straining the processing while others self-replicate inside the system within legitimate application folders. Adwares are used for aggressive product promotions.

How can a Malicious Software gain Access to your Device?

The K7 report and Avast antivirus software had found that the Operation Cerberus banking Trojan was added to a currency converter application and put for download on Google Play Store. Currently, reports are coming from Spain about this cyber attack tactic is taking undue advantage of the Spanish mobile users. But the K7 Cybersecurity found that the Indian banking users were also the target of this malware. This is one of the ways in which any virus can get access to your system; here are some other ways:

Becoming a victim to such cybercrime attacks is in your hands. Provided that you adopt the requisite protective measures, you won’t have to deal with such issues. Follow these preventive steps:

If you are not aware of what is cyber insurance or would it secure you against cyber attacks then here’s the verdict: Yes, a good and authentic insurance policy will surely cover the monetary losses for the damage done by malicious software. This includes: From the 1st malware attack, Creeper Worm, which was only developed for experimental purposes to the Operation Cerberus, such attacks have become highly sophisticated. So, taming them requires adequate prevention and damage control measures, that is provided by a cyber insurance policy. So, stay alert and save your money from being extorted.